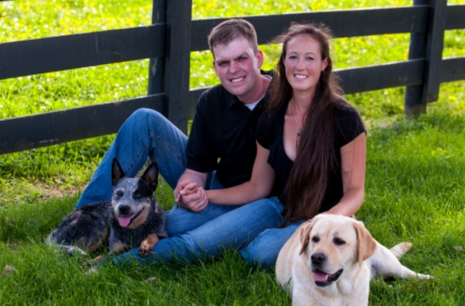 Stephanie Sedlacko Brannan's experience with horses began on her family’s Standardbred breeding farm where they stood 12 stallions and foaled 150 babies each year. She went on to ride equitation with industry greats Sally Lindabury of Reindance Stables, Jan Lukens of Lukens Stables, and Nealia McCracken of North Wind Stables. Stephanie even spent 3 years galloping and starting race horses for Mrs. DuPont. Eventually, though her love and passion for Saddlebreds drew her south to Kentucky where, in 2004, she accepted a training position with Bill and Nancy Becker at Shadow Run. Six years later, when the Beckers closed the public side of their Shadow Run operation, Stephanie was given the opportunity to re-open the barn under Wingswept Farm.

Chris Brannan has worked for such well-known industry names as Bill Waller, Todd Graham, Nelson Green, and 7 years with Merrill Murray, where he trained, to name a few: Samur’s Lady In Blue, Walterway’s Sam-me (now known as One Class Act), and Prom Dress.

In April of 2013, Wingswept Farm relocated to a beautiful 95 acre spread on Keene-South Elkhorn Road (Route 1267) in Nicholasville, KY where Stephanie and Chris train, instruct, and always have young show prospects available.